skip to main | skip to sidebar

This was a very long day…

After today’s trial I had a conversation with one of the representatives of “comforted” Azerbaijani youth. I told him about the case and it turned out he already knew about Emin (read a couple of his speeches).

I’ve been told that Emin has no content and is destructive in his criticism. That the things he says are ridiculous and wrong. That he needs to read and study more.

I wouldn’t argue. I only asked: “Should one get imprisoned for being ridiculous or wrong?”. The responce was: “I’m not well informed about the case and to be frank - I don’t really care”

Today I saw my friends sitting in a cage. Their hair were cut short, beards shaved, they lost weight and their eyes are more serious now.

Despite that, they kept the positive attitude, and it seems like, they endure the situation better now. During the break we finally had a chance to exchange couple of words with them, ask about books and other things they need. About how they’ve been doing these two months and how they feel now.

We could notice how happy they were to see their friends and families and how nervous they felt about the process. Yes, they would still hope for the justice to happen, they would still count on the judge to make a right decision.

“You can’t imagine how good it is for studying!” said Emin. “No one disturbs you. You can read and study all day long. I need more books!”. Then he saw one of his closest friends Erkin and joked: “Oh, I wish you were there with us!”.

Adnan called me from the cage, saying: “Do u remember when you brought us food in one of the first days?”, of course I did. It was Adnan’s birthday and we collected money to buy guys something to eat and even bought an apple pie for Adnan. “Sure, why?”. “I saw the paper (which has a list of the things and name of the person who brought them) and it made me cry”, he smiled back at me. My maternal instinct stuck somewhere in my throat and I was not able to respond anything to this.

During the process they would answer all the questions loud and clear, they would ask permission to talk and tell how the story actually happened. They would be confident and clever, as they always are.

The escort and court staff were surprisingly compassionate this time. One of them even brought me a bottle of water even though I didn’t ask. They would do the same for Emin and Adnan too, and I personally want to thank them for this.

One of the ‘victims’ turned out to be a 19-year-old director of the Lebanese restaurant which never appeared in papers before. The other one couldn’t decide whether he’s a welder or a stuccoer and it took him 5 minutes to figure out what IS passport and where he lives.

The representative of the ‘victims’ would call Adnan and Emin 'young politicians", basing on the report filed by guys, where they say that the fight started when they were having a conversation about politics. Moreover, he used it as an objection against the trial to be open because ‘state secrets can be uncovered during the process’. Both Emin and one of the lawyers Isakhan Ashurov tried to explain him the meaning of the word ‘politician’ and that talking about politics doesn’t necessarily mean to be a politician, as well as talking about football doesn’t mean to be a coach.

The defense has requested several motions including involving new witnesses, requesting videos recorded by street cameras in the area, the list of calls made by guys with position location, the suspension of detention, the release on bail and others, but all of them were rejected. In his turn, the prosecutor has requested two years of detention.

When the judge finished reading the decision he made and was about to leave the room, Adnan asked for a word. “Go on”, the judge said. “Your honor, during whole 2 months of our detention we haven’t been able to see or talk to our parents. Can you allow us to talk for five minutes now?”. The judge looked at him, sighed and said: “Sure. You have five minutes”.

We left them there happy to see their families and disappointed about having to go back to the jail. We waited until the escort took them out and sent them off shouting their names and “Azadliq” (aze. Freedom), attracting attention of the whole neighborhood and the cars that were passing by.

We didn’t care about the police around or people watching us. We knew this made Emin and Adnan feel happy and not alone.

You say it’s a young democracy, but how does it develop, if we had more democracy ten years ago than we have today?

You were lucky to have a chance not to study in local universities, but do you have an idea what’s going on there? Do you know about the level of corruption? Have you ever get the lowest grade for NOT bribing your professor?

Do you know about tax payers and the amount of taxes+bribery (if it’s a business) they have to pay?

Do you know about the problems people have in customs?

Have you ever seen the condition of Baku-Tbilisi train? Internal trains?

You say the country is beautiful and it’s developing, but have you been to the regions (outside the luxury hotels you usually stay at)? Have you seen the conditions people live in? Have you ever TALKED to them?

Do you know that women are not allowed to go to parks in Ismayilli, or that girls can be taken from schools after 10th grade by their fathers in Ujar, or married to some stranger (or a relative) by their parents in the age of 13 in Lenkeran?

Do you know what Emin did, when he learned about a girl married in the age of 10 in Lenkeran? He took 20 young people, got them in a bus and went there to talk to people. Have you ever done that?

Do you know that people in Mijan still remember Emin and the Open Air University he held there several years ago and now young people from there send him letters with blessings, saying how much they are grateful to him? Have you ever get those?

It’s only hundreds of you – those who live in different and fun Azerbaijan and MILLIONS of YOUR people who suffer all around the country.

Do you care about them?

Do you care about two young people facing two years in prison for bringing up all this?

Will you ever wake up from your wealthy dream and finally see true colors of the country we live in or are your cars going to be the only things left after you’re gone?

Both Emin and Adnan can be subjective in their attitude, destructive in their criticism or wrong in their views. But they do have the right to be wrong, subjective or mistaken, as well as you and 7 billion people living on Earth.

Look around. See how many people support these two guys even though they don’t have any power or money. Isn’t this the real power of love, friendship, like-mindedness and unity our fathers would fight for?

Who will care about making you happy when you’re all alone? 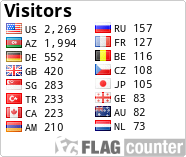